Our Lady Star of the Sea and St Joseph, founded 1860

Before the year 1842, the Catholics in Wallasey travelled to Liverpool for Mass.  Then a priest came from St Mary’s in Liverpool and said Mass at an inn called ‘The Hen and Chickens’ (now called the Great Britain) in Egremont. ……

1860  –  The Seacombe Mission was founded from the parish of St Alban’s, Liscard when a retired priest, the Very Rev Canon Sherwood, from the old Diocese of Beverley, began celebrating Mass in the upper room of a house in Chapel Street, off Demesne Street in Seacombe.

1861—1862  –  The new mission was served by priests from the Franciscan Order in Pantasaph and St Albans before Rev Joseph Jones was appointed as Parish Priest.  At this time 14 Chapel Street was purchased and a 2-storey school incorporating a chapel was built on adjacent land.

1870  –  There had been a great increase in the Catholic population and the land in Wheatland Lane was purchased for £600. Mrs Clarkson of Orrell House, Seacombe donated £500 and Bishop Brown contributed £100.  A mortgage of £1500 was approved towards building costs and money was raised through weekly collections and private donations.

1875  –  Fr Francis Lynch was appointed Parish Priest and the building of the school and presbytery were completed with a new chapel forming part of the school building. 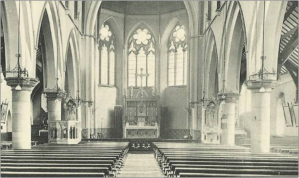 1888  –  The foundation stone was laid on 5th August and the church solemnly opened on 26th July 1889.  The church was very simple with a small altar, plain walls, plain glass windows, simple benches and gas lighting!

1897  – the land adjacent to the presbytery and church was purchased for future development. 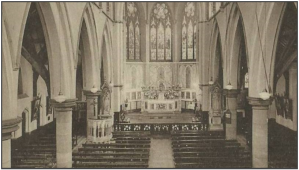 1902 –  The new infant school was opened.  The old school was refurbished and a new clubroom was built to serve as a school should the need arise.  During this time the church was also enhanced with carved oak altar rails and screens.  The main altar was replaced and marble panelling placed around the sanctuary.  Canon Singleton remained as Parish Priest until his Episcopal ordination at Our Lady & St Josephs Church on 21st September 1908 as the 5th Bishop for the Diocese of Shrewsbury.  He continued to serve the Diocese until his death at the age of 83 in 1934.

1939  –  The parish witnessed the ordination of 5 priests, Fr Mooney and Fr McGuiness were sons of the parish. During World War II, the church suffered slight bomb damage and required subsequent repairs and renovation including the installation of new benches and Stations of the Cross.

2006  –  The church underwent a major re-ordering under the guidance of Fr Jerome Fagan.  When the church doors closed at Easter 2006, week-day masses were celebrated in the presbytery and Sunday Masses in the School Hall.

The work progressed well and many changes took place during the coming months these included moving the baptismal font and pulpit onto the sanctuary; the altar was moved nearer the congregation on an extended sanctuary space; 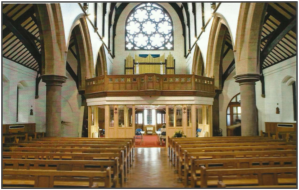 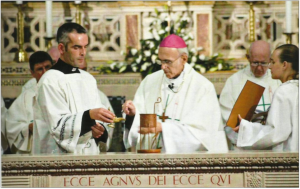 2011  –  Bishop Mark Davis asked Fr David Long to take over the pastoral care and administration of our parish alongside his duties as parish priest  of St Alban’s Parish   –  and so the wheel has turned full circle  –  since its inception in 1860 the parish of Our Lady, Star of the Sea & St Joseph has been served by 19 Parish Priests, 49 Assistant Priests and many hundreds of faithful servants who have given their time and talents to the parish community. Now 151 years from its foundation as the Seacombe Mission our church is again linked with the parish family at St Alban’s as we move Forward in Faith to be the Mission Church for the people of Seacombe and Liscard in Wallasey.

Note mass times may vary from week to week depending on circumstances. Check the Newsletter to confirm Mass times for this week..

This site has had: